Frame:   19th century and sympathetic to the subject - not the original

Details:  Born in Devon, Hudson started as a pupil of Jonathan Richardson and later married one of his daughters. His work was also influenced by Jean Baptiste Van Loo, the ‘rage’ of London in the late 1770s.

Sir Joshua Reynolds became one of Hudson’s students from 1740-1743 and went on to become perhaps the most famous portrait painter of the 18th century. His work gradually eclipsed Hudson’s who effectively became a forgotten artist.

But the story has a happy ending. When his first wife died Hudson married a wealthy widow, Mrs.Fiennes, and no longer needed to compete in the market place. He died in Twickenham in 1779.

This very finely painted portrait dating from circa 1740 is typical of Hudson’s style and finish, but as it has no firm provenance it was attributed by Messrs Christie’s to Hudson’s circle, not necessarily by Hudson himself, though in our opinion it is good enough to merit full attribution.

The portrait is of Mr. Robert Butcher, a well to do merchant from Walthamstow. No further details of him are known but he was born circa 1700 and was aged about 40 when it was painted.

Admiral Sir Robert Barlow (1757-1843) fought as a Lieutenant in the American War of Independance. He was in the fleet which relieved the great siege of Gibraltar. On 2 January 1793, whilst commanding the naval brig Childers, he was reconnoitring the port of Brest when he was fired upon from the forts there, the first shots of the Revolutionary and Napoleonic Wars which lasted for 23 years.

Two weeks after war was declared he seized the French privateer Patriote off Gravelines, the first naval engagement of the war, for which feat he was promoted to post captain and given command of the frigate HMS Pegasus.

His subsequent career was distinguished by a series of successes in minor naval actions, capturing several French vessels. The most interesting of these was the capture in 1801, after a fierce battle, of the French frigate Africaine which had been transporting French troops to Egypt. He caused over 300 casualties, with only 13 losses to his own company. For this he was Knighted and given command of the ship of the line, HMS Triumph.

His later career was spent largely ashore, becoming deputy controller of the navy, before his appointment as superintendant of Chatham Dockyard. In 1823 he was retired as a Rear Admiral, spending his retirement in Canterbury.

He was recalled to the Navy in 1840 to receive a belated promotion to full Admiral and advancement to Knight Grand Cross of the Order of the Bath. He died in the archbishops palace at Canterbury in 1843. His wife predeceased him by 26 years, but two of his daughters married well, one becoming Viscountess Torrington, the other Countess Nelson, wife of the first Earl Nelson.

Sir George Hilario Barlow (1762-1847) made his career in India. He was appointed to the Bengal Civil Service in 1778 and in 1788 arranged to permanent settlement of Bengal. He was created a Baronet in 1803. When the Marquess of Cornwallis, the Governor General, died in 1805, he was nominated as provisional Governor General, but the government eventually appointed Lord Minto to the permanent post, transferring Barlow as Governor of Madras in 1807.

Sadly, he was not a success in this post; his lack of tact and passion for economy caused a mutiny of his officers in 1809, eventually leading to his recall to England in 1812. He lived the rest of his life in retirement, though not without honours, being appointed Knight Grand Cross of the Order of the Bath, like his brother.

The portrait of Robert Butcher, the founder of this distinguished line, is in excellent condition and is held within a good early 19th century frame, not the original. 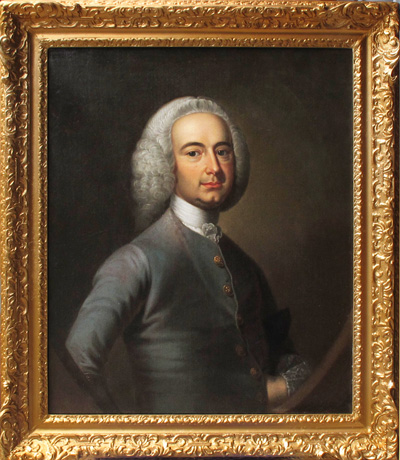