Details: An outstanding portrait attributed by Sotheby’s to Sir John Medina, the pre-eminent  Scottish portraitist of the time. It depicts him in full armour.

The Earl was imprisoned by Cromwell after the battle of Worcester.

At the Restoration he played a prominent part in the first ceremonial opening of Parliament by King Charles II.

George Keith was the second son of William Keith, 5th Earl Marischal and his wife Mary, daughter of John Erskine, Earl of Mar. He succeeded his brother, the 6th Earl  in 1671.

He had an interesting career, firstly as a soldier, serving as a Colonel in the French army early in his service. He held a command, ex parte Regis, at the Battle of Prestonpans during the Civil War in 1651, where the Royalists were soundly defeated, and again at Worcester on 3rd September 1651 where the Scots were overwhelmed by Cromwell.

He was taken prisoner and sent to Windsor Castle. On the restoration of Charles II he was released and participated in the ceremonial opening of Parliament, ‘riding out before’, with a permission cap, and a baton in his hand.

In 1662, he married Mary Hay, the daughter of the 2nd Earl of Kinnoull, who was Captain of the Guard.  Mary was Lady of the Bedchamber to the Queen. His niece Lady Mary Keith married the 6th Earl of Wigton as his second wife, but she died aged only 26.

The Elphinstones married into various other Scottish noble families, including the Earls of Mar, Wigton, Marischal and Kinnoull. The Earldoms of Wigton and Marischal are now extinct through lack of male heirs. However, they continued through the female line by marriages to the Kinnoulls and Elphinstones.

The Earldoms of Mar and Kinnoull still exist with the 13th and 15th Earls respectively, as does the Barony of Elphinstone, which is closely connected to the late Queen Mother and the present Queen through the marriage in 1910 of Lady Mary Bowes-Lyon  to the 16th Lord Elphinstone.

Sir John Medina was the pre-eminent Scottish portraitist of the late 17th and early 18th centuries.

He was born in Brussels, the son of a Spanish officer, and trained there as a portrait painter, moving in 1686 to London, where he was able to charge £8 for a half-length, and £4 for a head! However, his career really blossomed in 1688 when he was came under the patronage of  the Scottish 3rd Earl of Leven.

He moved to Scotland, where he maintained an extensive and lucrative practice. He was knighted in 1703.

He based his style initially on John Riley, but on moving to Scotland worked in a manner derived entirely from Kneller, (though looser in execution and redder in tone), which perhaps accounts much for his success.

Sir Roy Strong considers that his work is actually of greater merit than that of Kneller. 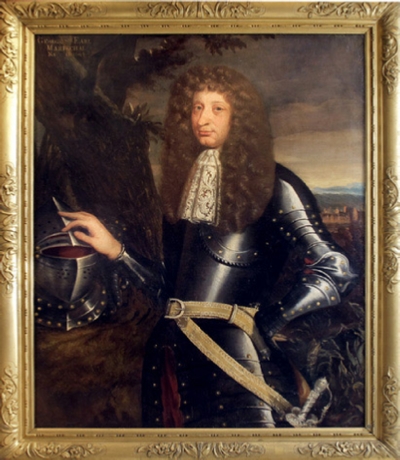